As I mentioned in an earlier post, a friend of mine is planning to run a modern era CoC game when our current Sunday Mutants & Masterminds game finishes.
Below is the character that I've decided to play.
The photo is of a real US Naval Officer I found while fishing the 'net for images to use in game sessions.  I've photoshopped it slightly, and I have no idea who he really is, so my apologies to him, wherever he may be, for attaching his photo here. 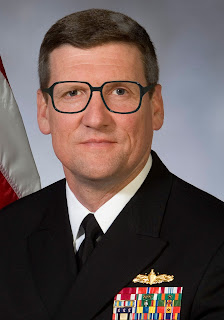 Randall Samuel Carlson is a retired US Navy Commander, former JAG officer who holds a Masters in Law and a Doctorate in Psychology.

He was happily married for 16 years of his Naval Career, then learned that his wife had been having affairs with random men and then killing them.  That's right, he was married to a serial killer, and was part of the NCIS team tasked with finding the killer and making the case against her.

That was eight years ago.  Four years ago, his twenty year old Daughter, Marisa, left home to attend Columbia University to begin her own training in Psychology and Chemistry.
Three months ago, Commander Carlson finished his 30 years of naval career.   He has spent the past three months knocking around, reviewing his ex-wife's case (she is up for Parole Review in six months and he thinks it's a bad idea for her to be released), and has uncovered some 'unusual' items in her personal journal and in the places she had visited during the time of her 'hobby'.

Email ThisBlogThis!Share to TwitterShare to FacebookShare to Pinterest
Labels: Call of Cthulhu, Characters