I ran my Ubiquity powered version of the Shattered Moon setting this past Sunday in the conference room at my office.  I had four of our normal usual players :P.  The characters played were Delman Stevens, Dutch Maroni, Jack Wagner and Professor Malloy.

I started them off on board a Tramp Steamer sailing up the coast of Africa from Cape Town to Casablanca.   Somewhere southish of Liberia, a sudden and eerie storm blew up.

All of the players had their characters head for safety down below, so I was unable to have anyone washed overboard, however, when the ship struck the inevitable rocks and began to sank, the player of Delman Stevens managed to roll NO Successes on a Dexterity check and slammed his head into the bulkhead, getting tangled up in his hammock as a bonus.

Everyone managed to get off the ship, Delman getting hoisted out of a hatch (and sliding down the tilting deck into shark-infested waters where he regained consciousness).   The players for the Professor and Dutch were late arriving, so I had the others make their necessary rolls for them.  The Professor fell off the ship and was washed ashore, being found shortly before the player arrived.   Dutch, being difficult to stun, managed to follow Jack Wagner and they both jumped into the waters and swam for the dimly seen shore as the ship slipped farther down into the waters.

The trio recovered a few random items from the debris on shore (I had printed up a whole stack of cards and reached into them at random every time they found something.  They got lucky, most of the stuff they found was quite useful).

After seeing purple lightning hit the same spot half a dozen times in the distance, and seeing (or not seeing as they insisted) large tentacles come up out of the water around the sinking ship, Jack, Dutch and Delman stumbled into some nearby trees and built a rough lean-to, gathered some coconuts and settled in to sleep.

While Delman stood watch, he managed to make friends with a small tribe of monkeys, one of whom threw a can of pork and beans at him.     He had Dutch take over the watch after a few hours, who, since he had no player present to guide him, fell asleep on watch.  The group awoke in the morning sunshine, with monkeys curled up next to them.

After a breakfast of Pork and Beans and coconut, the group managed to scare off a wild boar, find a few more useful items (including another half dozen cans of pork and beans), and find the Professor.

Traveling further into the island, they encounter a huge hole leading into the depths of the earth, a cliff face with a huge skull carved from it, lava running from one eyehole and into the hole in the ground.

Climbing up onto the plateau, they avoid some of the local wildlife and hear jungle drums and automatic gunfire.

To shorten the story a bit (I know, too late), they find Cannibal Natives, Thugs of the Thule Society, a rival Archaeologist, and the Mentor of Professor Malloy (who is being forced to help while the thugs threaten his lovely daughter).

Convincing the Cannibals to help them against the Nazis Thulians, they rescue the girl, head into the nearby caves where the professor is leading them to the Atlantean Weather Control machine that the Nazis Thulians want to control themselves.

The players stumble upon a shortcut through the complex, bypassing the traps the other group is having to navigate and crossing over a river of lava to reach the back door to the Weather Control machine just as the bad guys are arriving at the front door.

A brief but very pulpish fight leaves our heroes victorious.  They set the Maguffin to self-destruct and make haste for the Thulian boat, leaving as the island explodes and sinks in Bondian fashion.

I wrapped it up with them arriving ashore in a small trading post on the Liberian coast as their boat finally sinks from the beating it took when the island exploded.

Below are images of the character handouts I gave the players, plus the ones for the two unchosen characters.

oh, and the 'Attitude Track' and Resolve score are a mechanic for social conflict that I lifted from Rogue Games Shadow, Sword & Spell Game 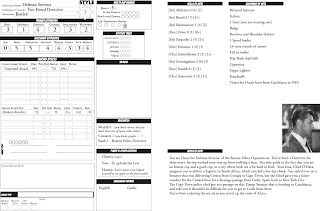 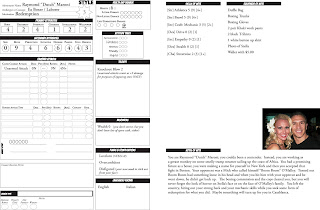 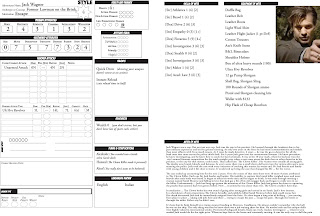 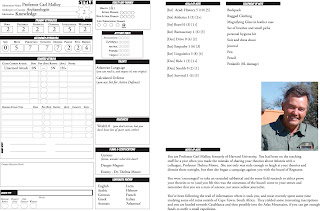 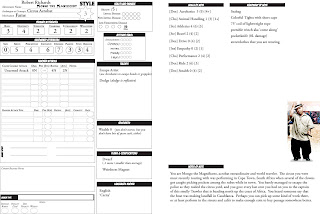 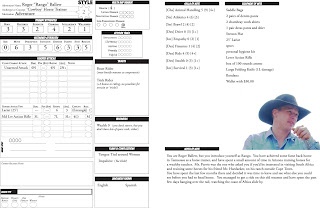