A Travelers Tale - A snippet for Swords and Wizardry Appreciation Day


The following is a fragment of a scroll or pages from a book that the GM can have the characters stumble across.

Dependent upon the GM’s wishes, this can either be used as a guide to a strange, new world after the characters have passed through a magical portal; or perhaps be found in their current, comfortable, known world and be used as a hint towards the existence of portals between worlds.

The text as follows (or a print out of the attached pdf marked Players Copy) should be imparted to the player characters.

Stats for creatures and people listed within will be listed at the end of the main text here, and will be compatible with Swords & Wizardry.

. . . Yesterday, after coming down from the mountainside where I emerged from the portal, only to find that there was no portal on this side, I came across Lisstrah, the alligator man, or saurial, as he said his people were called.

Lisstrah came to my aid as I fought the huge reptile that had attacked me on the edge of the vast swamp.

The Swamp Wyrm, as he referred to the dead creature lying on the ground, was still twitching from our battle when Lisstrah began to cut away the scaly skin; telling me to build a fire on a nearby bit of dry ground and that soon we would eat.

As he dressed the beast, my new friend told me that I was not the first to stumble through the wall of the mountain, although many fell prey to the dangers of the swamp.

During our meal and the days that followed, Lisstrah told me much of the swamp, and of the swamp wyrm.  The eyeballs of the swamp wyrm, he said, are much prized by the alchemists in the preparation of potions that allow the imbiber to see clearly under water, while it’s intestine is used by hideworkers to fashion waterproof containers, such as pouches and packs.

On the other side of the Great Salt Marsh lies a town known simply as Marshton.  Lisstrah said that his folk were typically tolerated in Marshton, and that his clan often traded in the market there.

The folk of Marshton refer to the Saurials as the ‘Swamp Spirits,’ because of their knack of appearing and vanishing suddenly when within the swamp and marshes.   The Saurials share the Great Salt Marsh with a folk called the Sskar-trog, or Troglodytes, as the locals call them. 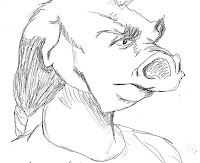 The Sskar-trog live in vast cave complexes beneath the swamp, and have a less than stellar reputation among the humans, since they have a bad tendency to look upon human animal pens as a communal feeding ground, and have not been very receptive about the concept of private property. 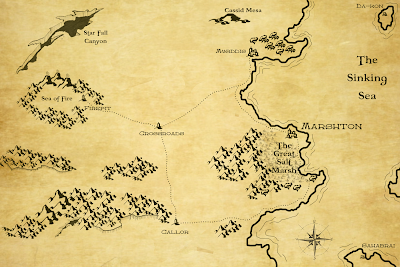 . . . I copied this map from one I found in the library at Myrddis.  Ever since I stumbled through the gateway near Hellespoint in my own lands, I have wandered this bleak, desolated world looking for a way home.

I have come to learn that worked steel is very valuable to the people of this world, which they call Zaalbar. Apparently the art of steelwork was lost at some time in the past and most steel weapons that existed have fallen into rust and disrepair.

I have learned more regarding the Lost Emperor, as many I have met have referred to him. . .

It seems that the Lost Emperor was an immortal being, virtually godlike, and that he had ruled this world for several millennia. One day, about three hundred years ago, another came and challenged the Emperor.

This challenger gave his name as Cron-Mar and he said that he would take the soul and power of the Emperor in single combat if the Emperor were brave enough to face him.

The generals of the Emperor's armies offered to fight for their beloved ruler, but he would not allow any to fight in his stead, and took the challenger out of the Holy City of Baalbek to face him in single combat upon the Plains of Myrrd.

The ringing of their swords was heard for six days and nights, until suddenly, a silence fell upon the land as the Emperor fell, Cron-Mar's axe buried to the hilt in the breast of the Emperor. A sudden and horrific storm sprang up from the skies as Cron-Mar threw back his head and laughed in maniacal joy. As the storm raged, the forests and grasslands of the world blackened and died, and items of steel and iron melted away, even as they were being worn and worked with, creating a horrifying death knell from across the lands.

Cron-Mar is said to have wandered the wastelands that remained, killing and raping as he desired. He was unstoppable, it is said that he would laugh off spear thrusts and sword blows as though they were naught but the wind.

For ten years did Cron-Mar lay waste to an already wasted world. Finally, he was heard to say that he was heading into the Starfall and richer worlds that were to be his for the taking.

Perhaps this meant that another gateway that leads away from this desolate, gods-forsaken world exists or existed in or near the chasm.

I intend to make my way there, but I feel I must first acquaint myself with the legends of this world to see if I could learn more to aid my search.

. . . Yesterday I met another traveler who had come through the gateway. She resembles the Kybari Elves of my world, but said she hails from a country called Artigili, in a very vibrant

and living world. Her name is Tuathan Cel Gord, or Tuath Silverwood, as she said it would tranlate into the common tongues of mankind.

Tuath has been on this world for two decades and had given up on finding a way home and recently taken up residence here in Myrddis. A lovely maiden, Tuath is a skilled bowyer and fletcher, talents very rare in this world with so few trees.

After my weeks of research in the Libraries, I have spoken to Tuath to let her know my intentions to leave and continue my search. She has agreed to accompany me on my quest to find a way home. While we were preparing to leave Myrddis, Lisstrah and Akut'tha arrived looking for me.

They had heard tales of something unusual near the Starfall and offered to travel with me to investigate. I was happy to have the companionship of friends again, and we shall set forth in the morning. . . 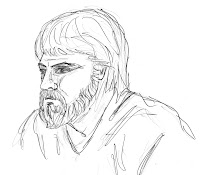 . . . I sketched this while staring at the mirror in the Fire's Shadow Inn last night. The past four years in this world have aged me more than those four years would seem, but my sword arm is still strong and my reflexes are still quick. We leave after breakfast this morning for the trek across the trackless wastes that lie between here and the Starfall itself. Perhaps my friends and I will find a way to leave this world soon . . .

Saurial Race
The Saurials are a reptilian race and can spend extended amounts of time underwater. Saurials are able to see underwater as clearly as on land, and their movement increased by 50% when underwater.
Their scaly hide provides Saurials with a natural base AC of 7 [12].
The only classes open to Saurials are Fighting Man, with a racial limit of level 6, or Saurial Scout, with no limitations.

Saurial Scout Class Abilities:
Tracking: Saurial Scouts are able to track other creatures, and are even able to do so from under water. The base chance for a Saurial Scout to track is 80%, modified by -10% for each day of age of the tracks. Saurial Scouts do not suffer any penalties for the trail being wet, whether it be from precipitation or the target passing through water.

Wilderness Survival: The Saurial Scout is adept at finding food and water in the most inhospitable environments. They can readily provide for themselves on a daily basis while on the move, and if they wish to spend 4 hours a day looking for food, they may provide food for 1d6+ half level additional individuals. Saurial Scouts can find ready shelter as long as some is reasonably available. 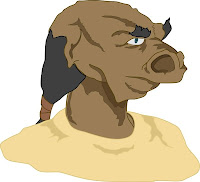 The contents of this post and the associated images and documents are declared open content and/or creative commons. the text, cartography and pathetic drawings are done by myself, Anthony Hunter.   Feel free to use as you wish, and support gaming companies, large and small with your purchases and your creativity.

Link to the PDF Players Handout
Posted by Anthony at 3:30 AM